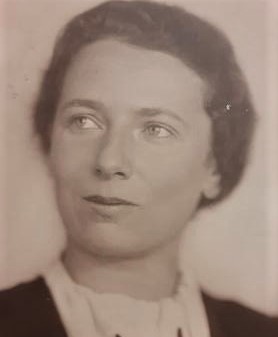 Liesl lost her mother when she was only two years old. Her
father, Wilhelm Adler, was a judge in Bruenn. He soon remarried so that Liesl
and her ten years older brother Hugo, would have a new mother. The stepmother
died when Liesl was still a teenager, and her father too lived only long enough
to see her married.

Liesl attended the Lyceum, a rather rare education for a
girl at that time. She also knew French and English in addition to her native
German and Czech.

Her only child, Dita was born in Prague. Liesl raised her
and kept the house. In summer she and Hans would go vacationing in the
mountains and Dita stayed with her grandparents. But with the occupation of
Czechoslovakia by Hitler, all the good life ended. They were persecuted and
hounded as Jews, and in 1942 the entire family was deported to Theresienstadt.

Liesl and Dita survived the concentration camps of
Auschwitz-Birkenau, forced labor camp in Germany and finally Bergen-Belsen.
They were liberated by the British army just before the end of the war. An
outbreak of typhus delayed their repatriation for two months. Yet Liesl
suddenly became ill and within two days she was gone. It was June 29. 1945.